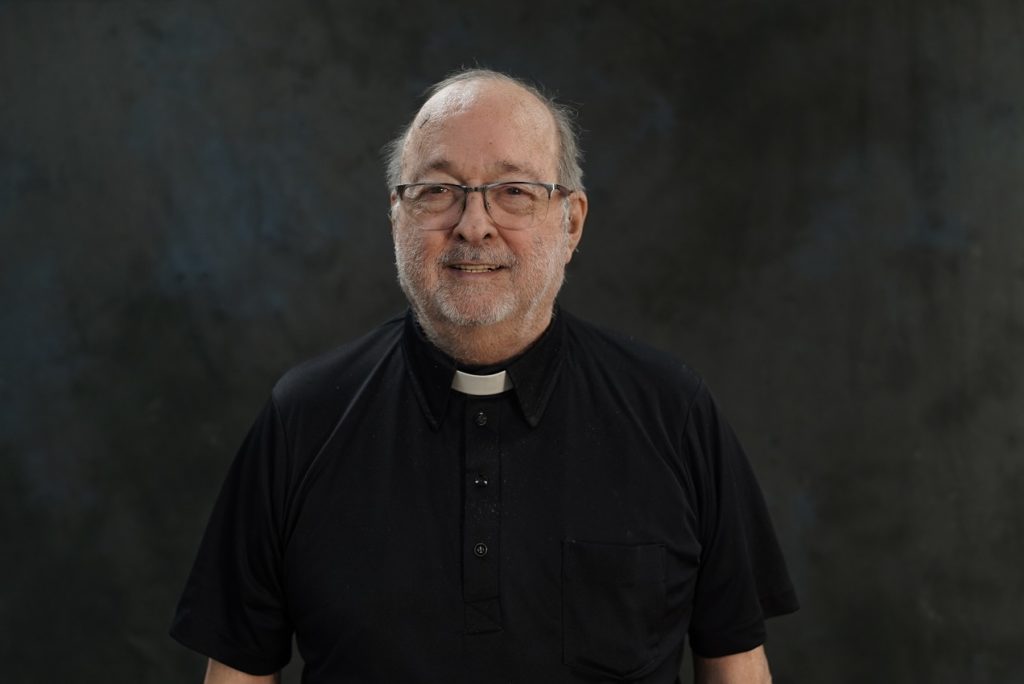 Fr. George served many decades and touched the lives of many of the faithful in Nevada.

Father George Wolf passed away in his home in Sparks, Nevada on September 8, 2022.

Although Fr. George’s desire was that the funeral mass be celebrated at his beloved Holy Cross, due to many concerns that it will not be a large enough venue, the mass was moved to St. Rose as noted below.

Vigil at 6:30pm at Holy Cross Catholic Church in Sparks on Sunday, September 18.

Funeral mass on Monday, September 19, at 10:30am at St. Rose of Lima Catholic Church in south Reno, with a reception to follow.

Father George Wolf passed away in his home in Sparks, Nevada on September 8, 2022. George was born on February 5, 1938 to George and Mary Wolf in Sacramento, California. He lived in Sacramento until his family moved to Reno Nevada in 1954. In Sacramento he attended Christian Brothers High School. George entered his junior year of high school at Ryan Prep, an early Jesuit-run seminary in Fresno, California, studying for the Diocese of Reno. After graduation he attended St. Joseph Seminary College in Mountain View, California and St. Patrick Seminary in Menlo Park. He was ordained a priest for the Diocese of Reno on March 30, 1963. Fr. Wolf served in many assignments in his more than five decades of priestly service in Nevada. His first assignment in April of 1963 was to St. Joseph parish in Elko and Administrator at St. John Bosco parish in Battle Mountain, but by the time a new school year was ready to begin he was assigned to the faculty at Bishop Manogue Catholic High School, while at the same time serving St. Joseph the Worker Mission in Empire (1963-68) and as Administrator at St. Robert Bellarmine parish in Fernley (1966-68). In addition to those assignments, from 1964 to 1968 Fr. Wolf also served as managing editor of the diocesan newspaper, the Nevada Register. In July of 1969 he was named co-pastor at Holy Cross parish in Sparks and principal at Bishop Manogue Catholic High School in Reno. He remained in both positions until 1975. In the summer of 1975 Fr. Wolf headed south to accept an assignment as pastor at Our Lady of Las Vegas, where he served until 1983. He returned to Sparks and his beloved Holy Cross parish in November of that year where he remained until his retirement in 2008. Fr. Wolf also served as Vicar General of the Diocese of Reno from 1997 until his retirement. Over his many years and assignments, he became known more commonly as Fr. George. After retirement, Fr. George continued to serve in priestly ministry, always ready to help his brother priests who needed vacation or support in their parishes by taking masses and assisting with other sacraments wherever he was needed. In addition to the Reno-Sparks-Carson-Tahoe area, Fr. George happily went to Yerington, Gardnerville, Winnemucca and just about anywhere he was asked to help. Additionally, in his retirement he would celebrate many a wedding, baptism or funeral for parishioners, Manogue graduates and long-time friends. In his latter years, due to diabetes, Fr. George began kidney dialysis, but still continued to help out in parishes. In the last year he could be found celebrating mass every Saturday evening at Holy Cross. Fr. George Wolf was a good and faithful priest and a loyal friend to many, many people. He was especially supportive of his bishops and brother priests and the work of the Church in Nevada. The absence of his physical presence among us will be felt for years to come. Fr. George was preceded in death by his parents, George and Mary Wolf. He is survived by his brother, Robert, and wife Rebecca, his sister, Mary, his nephews: John and wife Erin, Dan and wife Daisy and Paul and wife Jennifer and his niece, Jennifer Anne. He is also survived by his great nieces and nephews: Ryan and Rebecca, Sarah and Jacob, Raymond and Michael, Denise and husband, Mike, and their boys Anthony and Nathan. The Vigil service will take place on Sunday, September 18 at 6:30 pm at Holy Cross Catholic Community in Sparks, Nevada. The Funeral Mass will be held on Monday, September 19th at 10:30 am at St. Rose of Lima Catholic Church in Reno. In lieu of flowers, donations may be made in Fr. George’s name to Holy Cross Catholic Community in Sparks or Bishop Manogue Catholic High School in Reno.